I DIDN’T HATE THE HOW I MET YOUR MOTHER FINALE – HERE’S WHY - J. Kenner Skip to content

Not long ago, I posted on my Facebook Page that I was binge-watching How I Met Your Mother with my husband, and that we were thoroughly enjoying it.  Lots of readers chimed in about how much they loved the show, too … but that they were curious about how I would react to the ending.  (A few even told me to skip the last season!). I replied that I would let everyone know my thoughts… 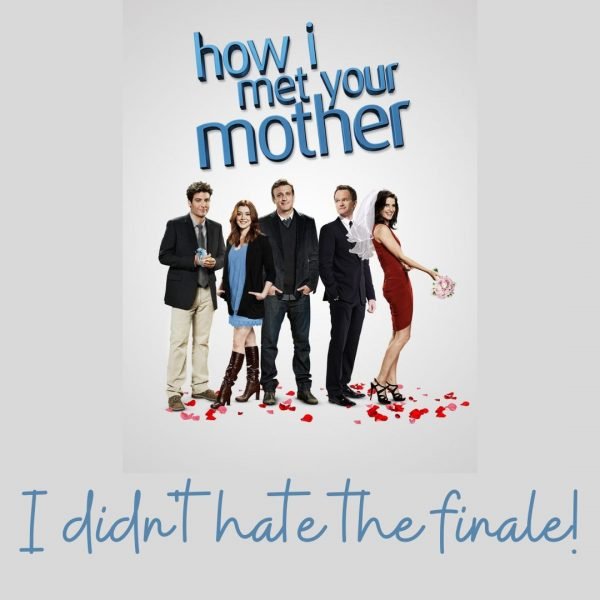 … and the truth is that I’m fine with the ending. It’s not my favorite ending of a series ever, and more than that, I understand why there are so many haters and meh-sayers. I really do. BUT … it worked for me (and my husband).

Here’s why (warning … spoilers ahead!):

Also, keep in mind some hints from the very beginning of where we were going with Tracy/Mother: She’s never in the scenes between Ted and the Kids. There’s no mention of why she’s not there with Ted and the Kids. And yet we know it’s not Robin who is the mother because we meet her early on. All of that … and yet the show is so clearly tracking Ted and Robin’s relationship, whether in a sexual or a platonic phase. (We’ll get back to the whole Ted and the kids thing.)

Now, Barney is my favorite character on the show. (Caveat being I could watch Neil Patrick Harris sitting on a bench and be entertained, so I’m a little biased).  That being said, part of the reason Barney is so great is that he’s a complete train wreck. So is Robin. And when Barney and Robin got together as friends, I loved it. Their goofy narcissism works well as friends. I even enjoyed seeing them together as a couple, but never once did I think that it would last. They were each other’s good time—and they are definitely close friends—but even the “big” gestures screamed of narcissism.  And despite saying that Barney needed to stop with the lies and games and that they needed to be honest with each other, they never really got there.

The proposal was clever, but more about Barney pulling off another one from the playbook than truly about the relationship. Ditto the rehearsal dinner and “bringing” down Canada for Robin. A big gesture and sweet in the moment, but their relationship always felt more show and drama than the sweet smaller moments. Bottom line—for me, I didn’t see it working, especially knowing that Robin wanted to travel for her job, become famous, all that stuff.

Then there’s the “theme” of the show—that there’s just one person out there for everyone. That Ted would find his Lily.

Except I don’t think that’s really the theme. IMHO, the show is all about laying that idea to rest. As a romance author, I play with that theme a lot, too, but the truth is, if something tragic happened to one of my favorite characters, would I want them to be alone for the rest of their life? Of course not.

I’d want them to find another person to love and who fits them. And I think that was definitely one of the themes of the show. Add in the fact that even up to the actual wedding of Barney and Robin, Ted is still so in love with Robin that he’s going to move to Chicago, and, well, that’s a big hint as to where we’re going to end up.

But JK, you say, what about the reason Ted and Robin broke up in the first place? They wanted separate things, right? She wanted a Big Career and traveling the world. Ted wanted a wife and kids—and he wanted it so much that he even bought the house first.

Well, they both got what they wanted. Ted got the family. Robin got the career. And, yes, it was tragic that Tracy died, but they did a good job setting it up. (The scene where Ted says something about what mother would miss her daughter’s wedding, and Tracy chokes up, and I told my husband right then that my guess was she was terminally ill).

So when Robin is back in the city and the Mother has passed away (and they have obviously all kept up because she is Aunt Robin), it makes perfect sense for the kids to tell their dad to go seek her out. They’ve just heard a story about how he met their mother in which mom was featured in maybe twelve episodes out of over two-hundred. She was an interesting character, and definitely “made” to be a good match for him, but I never thought she was a better match than Robin (who was where I always figured we’d land).

So, I was happy with the ending. The couple I wanted together got together. The couple that divorced (Barney and Robin) stayed friends—which they should always be. I liked The Mother well enough, but TBH, she wasn’t a character I really connected to. She had some fun lines and moments, but she didn’t feel as real as Robin (or the others). Possibly because we didn’t spend enough time with her, possibly because the writers intentionally made her a little “too perfect” so that we could quickly see she was a good match for all of Ted’s quirks, but not feel as attached to her as to Robin, who had genuine flaws and felt more rounded and real because of that.

Bottom line, the framing of the story worked for me. I didn’t spend enough time with Tracy to be truly devastated by her death (and because of the early scene with her and Ted, I was expecting it).  We got to see a lot of flash-forwards of their happy life together. But once it ended because of her illness, it made perfect sense to me that Ted and Robin would end up together.

Do I think it could have been done better? Sure. A few more episodes would have been good. But on the whole, I liked the ending. (And while I hope that Barney finds someone eventually, I even like how they ended with him having a daughter.)

So there you go. I’m not a HIMYM Ending-Hater.

Let me know your thoughts in the comments!