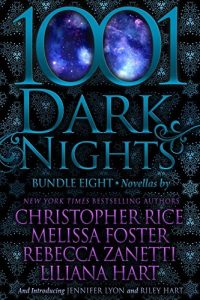 Kiss The Flame by Christopher Rice
Laney Foley is the first woman from her hard working family to attend college. That’s why she can’t act on her powerful attraction to one of the gorgeous teaching assistants in her Introduction to Art History course. Ever since he first laid eyes on her, Michael Brouchard seems to think about little else but the two of them together. And it’s become harder for Laney to ignore his intelligence and his charm.

Daring Her Love by Melissa Foster
Kat Martin knows what she wants in a man—someone stable and adoring, definitely not the type of guy who sleeps around. After all, Kat rarely does the wrong thing—until she meets seductively enticing Eric James. When it comes to his career, race-car driver Eric James is intense, obsessive, and passionate, but when it comes to sex, there’s only one kind—daring, unbridled, and no-strings-attached.

Teased by Rebecca Zanetti
Chalton Reese has left war and death in the past. His fingers now protect with a keyboard instead of a weapon. Until the vampire king sends him on one more mission; to hunt down a human female with the knowledge to destroy the Realm. Olivia Roberts has eyes like emeralds, a brain to match his own, and a passion that might destroy them both—if the enemy on their heels doesn’t do so first.

The Promise of Surrender by Liliana Hart
Mia Russo spent ten years working undercover before handing in her shield. Opening her own pawn shop is a piece of cake in comparison. Until the day Zeke McBride walks into her shop. Zeke knows Mia has every right not to trust him. He was the one who chose the next op instead of her. And all he can hope is that somewhere under the snarl and cynicism is a woman who can forgive.

Savaged Surrender by Jennifer Lyon
Bad boy Ethan Hunt is tainted by a past he can’t escape. Good girl Ana Kendall is a wicked temptation impossible to resist. She’s too innocent for him, so he leaves, joining the security team for the famous rock band Savaged Illusions. Since moving in with her dad at fourteen, Ana’s been the perfect daughter. But perfection sucks. It’s time to shed her good girl persona and go after what she wants—Ethan.

Jumpstart by Riley Hart
Motocross star Beckett Monroe is in need of R&R, not only to adjust to his new out-of-the-closet status, but in hopes of reigniting his passion for motocross. Support shows up in the way of Christian Foster, his childhood best friend and first love. Spending time with Christian is the jumpstart Beck’s heart needs. But even if Christian can forgive Beck for hurting him years ago, do they stand a chance against the obstacles in their path?