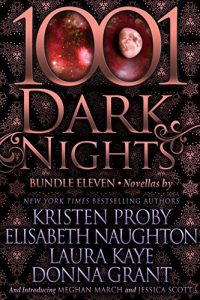 EASY FOR KEEPS: A Boudreaux Novella by Kristen Proby
Adam Spencer loves women. He’s comfortable with his lifestyle and sees no reason to change it. Sarah Cox has just moved to New Orleans, having accepted a position as a social worker. It’s a demanding, sometimes dangerous job, but Sarah can handle just about anything that comes at her, even the attentions of one sexy Adam Spencer. But the more time she spends with the enchanting man, the more he begins to sway her into believing in forever.

UNCHAINED: An Eternal Guardians Novella by Elisabeth Naughton
For thousands of years, Prometheus’s only certainty was his daily torture at Zeus’s hand. Now, unchained by the Eternal Guardians, he spends his days in solitude, trying to forget the past. He’s vowed no allegiance in the war between mortal and immortal, but when a beautiful maiden seeks him out and begs for his help, he’s once again powerless to say no. Soon, Prometheus is drawn into the very conflict he swore to avoid.

HARD TO SERVE: A Hard Ink Novella by Laura Kaye
When Internal Affairs investigates Detective Kyler Vance as part of the new police commissioner’s bid to oust corruption, everything is on the line. Mia Breslin’s career is golden. Now if only she could find a man to dominate her nights and set her body—and her heart—on fire. When a scorching scene with a hard-bodied, brooding Dom at Blasphemy promises just that, Mia is lured to serve Kyler again and again.

DRAGON FEVER: A Dark Kings Novella by Donna Grant
Rachel Marek intends to expose the truth about dragons to the world – and her target is within sight. Nothing matters but getting the truth, especially not the ruggedly handsome, roguishly thrilling Highlander who oozes danger and charm. Asher is more than just a man. He’s a Dragon King – a being who has roamed this planet since the beginning of time. With everything on the line, Asher must choose to trust an enemy in the form of an all too alluring woman whose tenacity and passion captivate him.

BENEATH THESE SHADOWS by Meghan March
The only permanent thing in my life is the ink I put on my clients.
I drift from city to city, in and out of beds, from one tattoo shop to the next.
Every time I start to put down roots, I rip them up.
Until New Orleans.
Until her.
She’s everything I’m not.
Full of fire and life. An innocent where I’m a sinner.
I want to consume her. Protect her. Keep her.
But first, I have to escape from beneath these shadows.

BEFORE I FALL: A Falling Novel by Jessica Scott
Beth Lamont knows too much about the harsh realities of life. She’ll do whatever it takes to take care of her father, even if that means tutoring a guy like Noah. Noah Warren doesn’t know how to be a student. All he knows is war. But he’s going to college now to fulfill a promise and he doesn’t break his promises. Except he doesn’t count on his tutor being drop dead gorgeous.