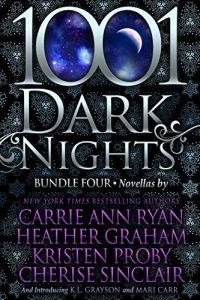 WICKED WOLF by Carrie Ann Ryan: Gina Eaton has always known fate can be tricky, but when she finds the one man that could be her mate, she might throw caution to the wind. Quinn Weston puts his whole being into two things: the safety of his Pack and his son. When the two Alphas put Gina and Quinn together to find a way to ensure their treaties remain strong, fate has a plan of its own.

WHEN IRISH EYES ARE HAUNTING by Heather Graham: Devin Lyle and Craig Rockwell are back, this time to a haunted castle in Ireland where a banshee may have gone wild—or maybe there’s a much more rational explanation—one that involves a disgruntled heir, murder, and mayhem.

EASY WITH YOU by Kristen Proby: With a murderer terrorizing the Tulane University campus, Asher Smith finds himself toe-to-toe with the one woman that haunts his dreams. Lila Bailey has fought for every good thing in her life during every day of her thirty-one years. Aside from that one night with an impossible to deny stranger a year ago, Lila is the epitome of responsible. When some of her female students are viciously murdered, Lila’s shaken to the core. But when Lila becomes the target, can Asher save her in time?

LIVE WITHOUT REGRET by K.L. Grayson: L.O.V.E. How can those four letters cause so much pain? Everyone talks about how great love is, with all the flowers and the butterflies, but that wasn’t my experience at all. Love wasn’t something I wanted or even needed. But then Connor Jackson came into my life.

OFF LIMITS by Mari Carr: According to the bro code, enacted by Evan Sparks and Logan Grady years ago, sisters are out. However, Lacy Sparks isn’t about to let a silly boyhood pact stand between her and the man she’s wanted for nearly twenty years. She’s waited long enough. Logan thinks she’s too sweet to give him what he needs. He’s about to learn as far as Lacy’s concerned, in bed or out, nothing is off-limits.