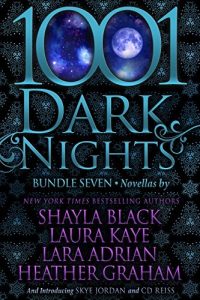 Pure Wicked by Shayla Black
During his decade as an international pop star, Jesse McCall has lived every day in the fast lane. When tragedy strikes, he sheds his identity and walks away, searching for peace. Instead, he finds Bristol Reese, a no-nonsense beauty scraping to keep her business. He’s intent on seducing her, but she’s not interested in a player. How will he convince her that he’s a changed man who wants nothing more than to make her his forever?

Hard As Steel by Laura Kaye
After identifying her employer’s dangerous enemies, Jessica Jakes takes refuge at the compound of the Raven Riders Motorcycle Club. Fellow Hard Ink tattooist and Raven leader Ike Young promises to keep Jess safe for as long as it takes, which would be perfect if his close, personal, round-the-clock protection didn’t make it so hard to hide just how much she wants him–and always has.

Stroke of Midnight by Lara Adrian
Born to a noble Breed lineage steeped in exotic ritual and familial duty, vampire warrior Jehan walked away from the luxurious trappings of his upbringing in Morocco to join the Order’s command center in Rome. But when a generations-old obligation calls Jehan home, the reluctant desert prince finds himself thrust into an unwanted handfasting with Seraphina, an unwilling beauty who’s as determined as he is to resist the antiquated pact between their families.

All Hallows Eve by Heather Graham
Salem was a place near and dear to Jenna Duffy and Samuel Hall — it was where they’d met on a strange and sinister case. They never dreamed that they’d be called back. That history could repeat itself in a most macabre and terrifying fashion. But, then again, it was Salem at Halloween. Seasoned Krewe members, they still find themselves facing the unspeakable horrors in a desperate race to save each other-and perhaps even their very souls.

Rendezvous by Skye Jordan
Keaton Holt knows all about the badass throwdown—on the movie set and in the bedroom. As the only sixth-degree black belt stuntman for Renegades, he’s made a career of translating those fighting skills to the big screen. He’s sown his oats and is ready for hometown and apple pie. When he gets a second chance with the stunning personal assistant Brooke, he knows she’s exactly what he needs—and he’s ready to use all his best moves to keep her this time.

Secret Sins by CD Reiss
She’s too young. Too smart. Too rich. She’s a virgin and knee-deep in rock-and-roll gods.
But life as she knows it is about to end. She’s going to get ripped apart, and the only thing she can do to keep it together is to keep her secrets.
She has no idea how many secrets are being kept from her, and when they come to light, her life will blow up all over again. Can she take it?
She’s Margie Drazen. She can take anything.