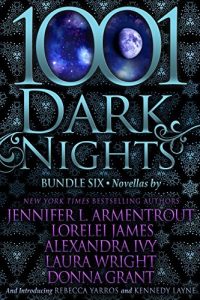 DREAM OF YOU by Jennifer Armentrout: Abby Erickson isn’t looking for a one-night stand, a relationship, or anything that involves any one-on-one time, but when she witnesses a shocking crime, she’s thrust into the hands of Colton Anders. His job is to protect her, but with every look, every touch, and every simmering kiss, she’s in danger of not only losing her life but her heart also.

STRIPPED DOWN by Lorelei James: A flirty game of sexual truth or dare between best man, Wynton Grant, and maid of honor, Melissa Lockhart during their BFF’s wedding reception results in a steamy hookup. But their plans for a one and done change when a family crisis leaves Wyn shorthanded at the Grant Ranch. Mel volunteers to help and gets way more than she bargained for.

RAGE: Rage has never had a problem charming the females. All except Lucie Gaudet. The lovely Geek is a born troublemaker, and it was no surprise to Rage when she was kicked out of the Wildlands. Now the Pantera need a first-class hacker to stop the potential destruction of their people, and it’s up to Rage to convince Lucie to help.

KILLIAN: Gorgeous, brutal, aggressive, and human, Killian O’Roarke wants only two things: to get rid of the Pantera DNA he’s been infected with, and get back to the field. Rosalie lost her mate to a human, and now the Hunter despises them all. In a time of war between their species, isn’t any chance of love destined for destruction?

DRAGON KING: Grace Clark has found the perfect spot to break through her writer’s block. Until Arian, a Dragon King who has slept away centuries in his cave, appears and tries to force her away from the mountain. Unaware of the war she just stumbled into, Grace doesn’t just discover the perfect place to write, she finds Arian – the most gorgeous, enticing, mysterious man she’s ever met.

IGNITE by Rebecca Yarros: In Legacy, Colorado, I buried my father alongside his elite Hotshot team. Ten years later, I’ve followed in his footsteps—fighting fires in the mountains of Alaska with my brother.
Amid the flames, nothing ignites me like Avery Claire. She’s stubborn, strong, sexy as hell, and my best friend. She also has no idea that I’m in love with her.

FATED IDENTITY by Kennedy Layne: Grady Kenton relishes the long seductive weekends with Brienne Chaylse, the beautiful CIA liaison who understands his boundaries and accepts things the way he needs them to be. When Brienne’s identity as a CIA special agent is leaked to the media, she and Grady must race to discover whose betrayal runs deep while their true feelings emerge.