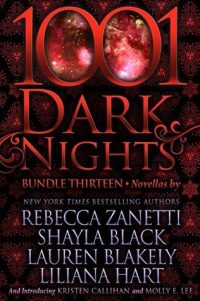 TRICKED: A Dark Protectors Novella by Rebecca Zanetti
Ronni Alexander had it all before a poison attacked her heart and gave her a death sentence. Now she has an opportunity to live if she mates a vampire. One night of sex and a good bite, and she’d live forever. Jared Reese agrees to help out his new sister in law by saving her friend’s life with a quick tussle in bed. But after one night with Ronni, he wants more.

DIRTY WICKED: A Wicked Lovers Novella by Shayla Black
After being framed for a crime he didn’t commit, Nick Navarro has nothing but revenge on his mind—until a woman from his past returns to beg for his help. Sasha Porter has been hunted by his enemies. Desperate, she offers him anything to keep her young daughter safe, even agreeing to become his mistress. The last thing either of them want are emotional entanglements but as they entrap the ruthless politician who arranged Nick’s downfall, passion sizzles between them.

THE ONLY ONE: A One Love Novella by Lauren Blakely
Let’s say there was this guy. And he gave you the most mind-blowing night of sex in your life. And you never saw him again. Until ten years later. Now, it turns out he’s the ONLY ONE in all of Manhattan whose restaurant is available for my charity’s event. The trouble is, he doesn’t recognize me.
* * * *
This woman I’m working with is so damn alluring. The first time I set eyes on her, I’m captivated and I can’t get her out of my mind. Even if it’s risky to tango with someone I’m working with, she’s a risk I’m willing to take. The trouble is, she won’t give me the time of day. But I’m determined to change that.

SWEET SURRENDER: A MacKenzie Family Novella by Liliana Hart
It’s been twelve years since Liza Carmichael stepped foot in Surrender, but after her great aunt’s death she has no choice but to return and settle her estate. After twenty-five years on the job, Lieutenant Grant Boone finds himself at loose ends now that he’s retired. The only thing Boone knows is that his future plans don’t include Liza Carmichael. She’s bossy, temperamental, and the confections she bakes are sweet enough to tempt a saint. Thank God he’s never pretended to be one.

EDGE OF CHAOS by Molly Lee
Three years into her Meteorology degree, Blake meets professional storm chaser, Dash Lexington, who is as gorgeous as he is daring. Instantly recognizing her passion and skills in analyzing weather data, he makes a spot for her on his tight-knit storm chasing team. Dash and Blake form a fast friendship and she can’t deny the lightning-worthy chemistry she has with Dash.