Find Me In Darkness - J. Kenner Skip to content 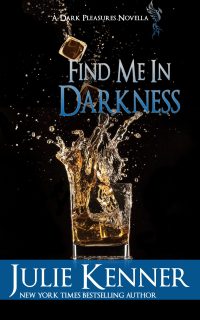 From the first moment I saw Malcolm, I felt his power shudder through me. Lithe and powerful, dark and controlling, he cast a spell over me that I didn’t understand, but to which I willingly surrendered.

One touch and I melted. One glance into his storm-swept eyes and I was lost. One kiss, and I was bound.

But sometimes passion can burn too hot, and it would take all of our strength for Mal and I to survive the fire that raged between us…

Find Me In Darkness is Story # 2.1 in the Dark Pleasures series.

Find Me In Darkness - Buy Now

Mal stood by the bed and looked down at the woman he’d just fucked.

She was drop-dead gorgeous, lithe and strong with alabaster skin and hair as dark as his own. She was smart and funny, had good taste in wine, and had sucked his cock with rare skill.

Not a bad resume, when you got right down to it, and if Mal had even an ounce of sense he’d slide back into bed, sink deep inside her, and try once more to forget how goddamn lonely he was.

She didn’t deserve that. Hell, none of the women he fucked deserved that. Which was why he had a strict one-time only policy. Shared lust and pounding sex to work out some of life’s kinks was one thing. But Mal didn’t do serious or personal. Not anymore.

He’d had serious. He’d had personal.

And not only love, but respect and humor and passion so intense that he felt alive only when he touched her.

He’d had all that.

Now, all he had was a nightmare.

On the bed, the woman shifted, then smiled up at him, soft and sultry. “Mal? What’s wrong?”

He said nothing, and she sat up, letting the sheet fall to her waist to expose her bare breasts as she held out a hand to him. “Come back to bed and let me make it better.”

If only it was that easy.

“Go?” She glanced at the clock and then pulled up the sheet to cover her nakedness. “It’s not even midnight.” Her voice was indignant.

He didn’t wince, didn’t try to defend himself. What defense was there against the truth?

Instead, he moved to her side, then brushed his fingers lightly over her forehead. “Sleep,” he said, then stepped away as the woman fell back against the pillows, lost once again to the world of dreams.

He pulled the sheet up to cover her, then glanced around the room in search of his clothes. He’d brought her to the penthouse suite at the stunning Gardiner Hotel, a relatively new Fifth Avenue boutique in which he held a significant financial position. Now he moved through the bedroom and parlor, gathering discarded garments as he walked.

He pulled on his jeans, then slipped his arms into the white button-down that he’d worn that evening before going out in search of a woman to take the edge off. He let it hang open as he stepped out onto the patio, then moved to the stone half-wall that separated him from the concrete and asphalt of Fifth Avenue twelve stories below.

It would be easy enough to jump. To end his pain, even if only for a few moments.

And a few moments were all that he would get before the phoenix fire would surround and gather him, reducing him to ashes before once again regenerating him.

Immortality. Had he truly once believed it was a gift? To have an eternity in this body that could touch and feel and experience such profound pleasure?

Had he truly once believed it was a gift? To have an eternity in this body that could touch and feel and experience such profound pleasure?

Three thousand years ago, it had been a gift, but that was when she’d been beside him, and it was Christina he’d been touching. Caressing.

Christina he’d held in his arms. Whose lips brushed gently over his skin. Who whispered soft words so close to his ear that even her breath aroused him.

But then everything had gone to shit and he’d realized that immortality wasn’t a gift. It was a curse.

He was immortal. He was alone. And every goddamn day was torture.

He closed his eyes and clutched the railing, his hands clenched so tight that the rough-hewn edges of the stone cut into his palms.

He reached out with his mind, searching for her as he did every night with equal parts dread and longing.

Sometimes centuries would pass before he felt her presence resonate through him, sometimes only decades.

It had been two hundred and sixty years since the last time he’d found her, her energy reaching out to him even from across the Atlantic, even though she never had a conscious memory of him, or even of herself.

He’d gone to her—and once more, he’d done what he had to do.

That he would not have to go to her yet again.

Nothing. Not even the slightest tingle of awareness.

He breathed deep, relieved, and slowly let his body relax. He turned to go back inside, but the moment he did, everything shifted. The force of her essence lashed out, catching him unaware.

It surrounded him. Burned through him.

This time, she was close. So close that it wasn’t just her essence that filled his mind, but her. The memory of her scent enveloped him, the sensation of her skin against his, the taste of her lips, of her flesh.

He sank to his knees, wanting to run. Wanting to retch.

But he could do neither. And slowly—so painfully slowly—he stood.

He would do what he had to do, the same as he had done over and over again for millennia.

He would find her.

He would allow himself one moment to look at her.

And then, goddamn him, he would kill her.