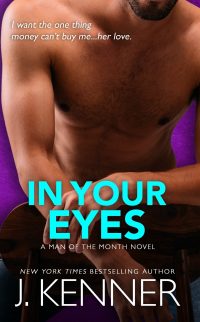 Man of the Month 6

In Your Eyes is the sixth in a binge-read series by New York Times, USA Today, Wall Street Journal, Publishers Weekly, and #1 International bestselling author of the million copy Stark series, J. Kenner.

In Your Eyes - Buy Now

In Your Eyes is Story # 6 in the Man of the Month series.

➜  Add the series on Goodreads!