Love in the time of Coronavirus - J. Kenner Skip to content

Home » Books » Anthology (Multi-Author) » Love in the time of Coronavirus 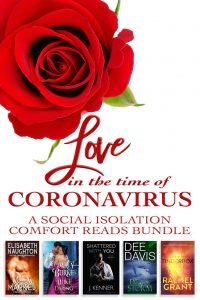 Curl up in your favorite spot with your favorite beverage and five of your soon to be favorite romance novels! Proceeds benefit ProLiteracy! Find more information here: https://proliteracy.rallybound.org/romance-for-literacy/. There’s something for everyone in this set—happy comfort reading!

The Duke of Daring by Darcy Burke

Out of money, Miss Lucinda Parnell disguises herself as a man to gamble in London’s hells. But when the Earl of Dartford insists on being her protector, Lucy fears her independence will go up in flames. After losing his family, Dartford keeps attachments at bay, for love is the one risk he can’t dare.

Eye of the Storm by Dee Davis

The past never stays buried for long, and when ex-CIA operative Simone Sheridan’s world flips on end, the charade she’s been living begins to crumble; and as reality closes in, Simone must fight to protect her family from a vicious assassin intent on destroying the people she loves.

Dr. Morgan Adler has made the archaeological find of a lifetime, which puts her in the crosshairs of a warlord eager to claim Morgan and the fossils. Green Beret Pax Blanchard is assigned to protect the scientist in the scorching desert heat, but can he keep his hands off her when the sun goes down?

Shattered With You by J. Kenner

Quincy Radcliffe has fast become a key asset at the newly formed Stark Security. A former British agent with lethal skills and criminal connections, it’s a no-brainer for him to rise through the ranks. But Quincy isn’t the man he appears to be. And one woman could expose all his secrets.

Theron, leader of the Eternal Guardians, an elite group of warriors who defend the mortal realm, must find the one mortal woman whose death could stop a massacre. But she is not what he expects, and as war with the immortal realm nears, someone will have to make the ultimate sacrifice.

Love in the time of Coronavirus is part of the Anthology (Multi-Author) series.

Love in the time of Coronavirus - Buy Now