“This series was my most anticipated read, and now added to my favorites TBR list. #2021BookRec” – Crystal’s Book World

He’ll keep her safe, no matter the price.

Investigative reporter Ellie Holmes has uncovered billionaire Devlin Saint’s dark and dangerous secrets, and he has both stripped away her protective armor and tamed the wildness within her. Bound by a shared past and the hope of a blissful future, they grow even closer, each exposing more of themselves as their love deepens.

But now that Devlin’s true identity has been publicly revealed, old enemies appear, intent on destroying Devlin. And while he vows to enlist all of his resources to protect her, Ellie soon realizes that the only way to save them both is to take the last, final step to fully join Devlin in the dark.

My Cruel Salvation is Story # 3 in the Saints and Sinners series. 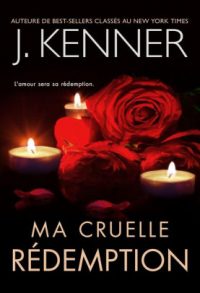 Alejandro Lopez held the gunmetal black Glock in his hand as he stood on the range beside his father, the desert sun beating down on them. He was ten years old and tall for his age, lanky and thin. He came up almost to his father’s shoulder. Soon, he’d probably be taller than the man. Stronger, too.

He could barely remember her now, but every night he made himself think about her hugs and bedtime stories. The ones where he was Alex, and he was brave, and he was fighting the bad guys.

She never told him who the bad guys were, but he knew the answer now. They were these men he lived with. All of the men, but his father most of all. The Wolf.

He swallowed the lump in his throat, forcing his shoulders not to shake and his face to stay expressionless. Showing emotion wasn’t allowed around The Wolf. No exceptions and no excuses.

Alex had the bruises to prove that rule.

He needed to work hard. To get better. To bury everything he felt deep inside so that his father would never, ever see the hate. Or, worse, the fear.

He had to make a life here. Had to figure out a way to belong even while honing that deep and secret hate. Even while planning his revenge.

He had to, because that was the only way that Alex knew he’d be safe. The only way he could be certain that his father wouldn’t decide to get rid of him, too, the same way he’d gotten rid of his mother.

Not that The Wolf had ever admitted that to him, but Alex learned a long time ago that it was better to listen than talk. He’d heard things over the years. And even though he’d only been a little kid when his father had dragged him back here to the desert, he remembered things. Things he made sure The Wolf never knew about.

That’s what his father liked to call himself. It’s what he made everyone at the compound call him when they talked about him.

The Wolf called a meeting; you need to report to the office.

The Wolf is angry today. The Phoenix operation went tits up. Steer clear.

The Wolf has his eye on Frank. Poor bastard.

And then Frank wasn’t ever seen again. It sucked, because Alex had always liked Frank. The gray-haired man used to sneak him butterscotch candies wrapped in yellow cellophane. But Frank talked to someone he wasn’t supposed to, and The Wolf found out. And that was the end of Frank.

Beside him, The Wolf shifted, his own weapon held casually at his side. “You have been practicing, Alejandro?”

“Yes, Father.” His father made everyone call him The Wolf; everyone except Alex. The Wolf wanted Alex to know who he belonged to. Alex was careful to call the man Father when he spoke. But in his head, he mostly thought of his father as The Wolf. Because that man wasn’t a father. Not really. Not like the men he remembered from Los Angeles. The kind and loving fathers that his friends called Pop or Daddy, and who they’d run to with outstretched arms to receive hugs and praise.

Alex had wanted that, too. But as he felt the weight of the gun in his hand, he knew he’d never have it.

“Let’s see it then.” The Wolf nodded across the stretch of parched Nevada desert. In the distance, several bushels of hay had been set up, white paper targets attached to them with outlines of men in solid black. On each face, someone had painted two red eyes.

“That man is your enemy. He has wronged you. He thinks that you are less than him because of what you are and what you do. Is that man right?”

“No, Father.” Alex worked to make his voice not tremble. His father scared him when he was in this mood. Alex once saw him crack the skull of a man who didn’t answer a question exactly the way The Wolf wanted. The man had been named Michael, and he used to tell Alex funny stories about the time that he had visited Paris. Now, Michael couldn’t remember that time.

Most days, he couldn’t even remember his name.

“What do we do with men who have wronged us?” The Wolf asked.

“We teach them a lesson, Father.” Alex’s voice sounded dull to his own ears. He hoped his father couldn’t hear the fear that he was trying so hard to bury. Fear and loathing. He hated this man. But he knew that he couldn’t let it show.

“Yes. Yes.” Alex could hear the pride. It made him feel sick. “That’s my son. Now you show me how to teach that lesson. The man who wronged you is right there, looking at you across this field. Are you going to let him diminish you?”

“Then lift your weapon and show me what you can do.”

Alex did as he was told. He lifted the handgun, working hard to keep his arm from shaking. He aimed the way he had been taught. His father wanted him to hit the target’s red eye.

Precision and accuracy, Alejandro. That is what I require of the men who stand at my right hand. You are my son, but you must earn your spot. Precision, accuracy, and the utmost loyalty.

Alex had been working for weeks to be able to hit the target from this distance. It was far for such a small target—twenty yards—and his father expected him to work his way up to at least forty, then move on to practicing with a rifle. He drew a breath, gave himself a moment to study the wind, then gently pulled the trigger.

He felt the blast in his arms, and his ears rang despite the plugs his father allowed him to wear while training.

And then he went completely cold.

Those two red eyes were both still intact. But there was a hole between them, a black splotch against the white paper.

The target would be dead for sure. But that wouldn’t be enough for his father.

“I did, Father.” He heard the shake in his voice and wanted to cry. Tears pricked his eyes, and he knew he was the biggest baby in the world.

“You did not practice enough. Look at me, boy.”

Alex turned slowly, then tilted his head up. His father scowled at him, his hard gaze taking in his face and then skimming down his skinny body. The disappointment wasn’t just in his voice now. Alex saw it all over the man.

Alex swallowed. “You are.”

“And did you make me proud?”

He forced himself not to wince; he knew what was coming. “No, Father.”

Slowly, The Wolf nodded. “It is good you know this. Now,” he added as he lashed out, the cold steel of his pistol connecting with Alex’s jaw and knocking his head back, “now you will remember.”

Alex staggered, his knees like spaghetti. But he didn’t fall. Falling would only make it worse. “Yes, Father.”

He bit back a whimper because the mantra that his stepmother, Aurelia, had taught him wasn’t helping at all. He wanted to press his hand to his face.

He wanted to cry.

Instead, he stood like a statue. He had to. If he didn’t it would be worse. Much, much worse.

Years passed in the next few seconds and still he stood frozen.

Finally—finally—his father put his hands on Alex’s shoulders. “Look at me, boy.”

Alex tilted his head back and once again met his father’s eyes, their dark cruelness softened now with something that The Wolf might actually believe was love. “I do this to make you a man,” his father said. “I do this so that when you grow up to take what is yours, you will be respected. Feared. Your lieutenants will fight for you because they will know that you are strong. That you will lead them. And that if they betray you, you will hunt them down like the dogs they are. Do you understand, boy? Do you understand that all that is mine will one day be yours?”

“And can you run our empire if your men do not respect you?”

“How will you earn their respect?”

“I will excel, Father. I will be the best at everything I do.”

“Including striking down your enemies?”

“If you cannot aim your skill with razor-sharp precision at your target, you will fail, boy. Not just at the eye of a target, but at any goal that you set. You learn that, and you will deserve to inherit what I have built, and you will make it even greater than I have. Do you understand how much I love you? How much I have built for you?”

Bile rose in Alex’s throat as he nodded. “Yes, Father.”

“Go to your mother. Tell her you failed. But because you will do better tomorrow, you may have a cookie with your lunch.”

“Yes, Father.” Once again, his knees were rubbery. This time, with relief.

“I—” He shut his mouth. He knew better than to question or argue. He only hoped that Eric—the man who trained him daily at the range—would still be alive tomorrow. “Yes, Father,” he said. And then, before his father could say another word, Alex Lopez took off running.