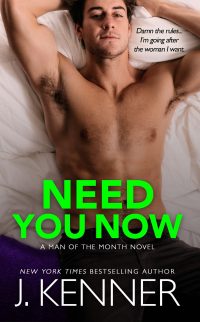 Man of the Month 3

With his tousled hair, cocky grin, and surprising abs hidden under a conservative button-down, bartender Cameron Reed is no stranger to the attention of women.

He dates, but never gets serious, claiming that he’s too focused on his studies. But it’s not really school that preoccupies him; it’s sensual fantasies of his best friend’s sister.

Mina Silver might be absolutely off-limits because of her overprotective brother and father, but that doesn’t stop Cam from imagining the feel of her in his arms, the brush of his lips over her soft skin, or the sparks that would fly between them if he ever got her into bed.

But for Cam, the bonds of family and friendship are sacrosanct, and there is no way that he’d ever violate his friend’s trust. Or would he?

Because with love on the line, maybe it’s time for Cam to break a few rules.

Need You Now is Story # 3 in the Man of the Month series.

➜  Add the series on Goodreads!