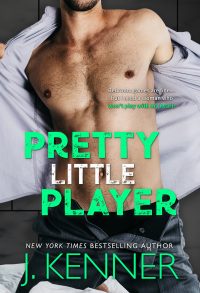 Bedroom games are fine … but I need a woman who won’t play with my heart.

After years in the military, I’ve faced down a lot of things, and there’s not much I shy away from. Except relationships. Because when you catch your wife in bed with another man, that tends to sour even the most hardened man against women.

When I was hired to keep surveillance on a woman with a checkered past, I went into the job anticipating the worst. But what I found was a woman who turned my head. Who made my blood heat and my body burn. A woman who made me feel alive again.

A woman who was nothing like what I expected, but everything I wanted. A woman who, it turned out, needed my protection. And wanted my touch.

And as the world fell out from under us, and everything I thought I knew shifted, there was only one reality I could hold onto—that the more I got to know her, the more I wanted her.

But if I’m going to make her mine, I’ll have to not only keep her safe, I’ll have to prove to her that I’ve conquered my own fears and doubts. That I’m done looking into the past, and that all I want is a future—with her.

Pretty Little Player is Story # 2 in the Blackwell-Lyon series.

There are times in a man’s life that can be counted among the best ever. First kiss. First fuck. First taste of caviar and fine champagne.

And the first time he meets the woman of his dreams.

When he sees her across a room, her eyes sparkling. When he holds her in his arms on the dance floor, his thumb brushing the bare skin of her back, revealed by her low-cut dress. When he gets lost inside her the first time they make love.

That should be it, right? The pinnacle of life. The cherry on a sundae.

If you stop the story right there, then it’s all about the happy ending. That’s where the movies always fade to the credits, right? Those sappy engagement ring commercials? The ads for flower delivery? Every syrupy romance novel?

They all end on the high note.

But turn the page, and guess what? That guy who won the girl? He’s not still singing a love song. On the contrary, he’s completely fucked. But not in the literal sense.

Because in the real world, it’s some pretentious grad student who’s screwing his wife. And the guy wearing the ring—the guy sweating his ass off in fatigues in a foreign desert so his woman can sleep safe at night—that guy’s nothing more than a cuckolded fool.

Maybe. I don’t know. Is there a limit to pain when you have a broken heart?

All I know is that I’m not alone. And the truth is, misery really doesn’t love company.

But those pleasures in life I mentioned? A man’s best moments? One of them is when he catches a cheating woman in the act and completely shuts her down. I ought to know. In my line of work, I’ve helped out a lot of guys with that particular problem. And I’m good at what I do.

Payback’s a bitch, after all.

THE INTERNET IS AN AMAZING THING.

Not even four hours since I took on my case—a cheating fiancée—and I already have a hefty amount of intel on the two-timing little bitch.

I know her name is Gracie Harmon, although to be fair I learned that fact from my client. She’s twenty-nine years old and owns a small house in Travis Heights, although for the past few days, she’s been living in the ultra-classy historic Driskill Hotel on Congress Avenue. Convenient, since my office is just across the street, but a bit odd. Her house is only a few miles away, after all, and as far as I can tell there are no renovations or pest treatments or other maintenance-related activities currently underway.

Suspicious? A bit. But maybe she’s not camping out in a high-end love nest. Maybe the girl just likes to be pampered. Except I also know she hasn’t arranged for the hotel masseuse, and the concierge hasn’t booked her time at an off-site spa.

So that’s one mystery.

But on the plus side, I know the online address for her Instagram, Facebook, and Twitter accounts. So, if she posts about the hotel, I’ve got a window. Although she doesn’t seem to post much at all, and what she does stays far away from the personal. A bit odd in the share-everything-right-now world we live in, but not condemning.

I know that she makes a decent living as a model—according to her Instagram profile, she primarily models plus-size lingerie and swimsuits—and I know that she’s stunning, with golden blond hair, hypnotic blue eyes, and the kind of curves a man appreciates. Granted, that’s more a personal preference than a fact, but considering what she does for a living, I also know that my opinion is shared by any number of men.

Maybe that’s why she cheats? The temptation is just too hard to resist when so many men see so much of her online?

To which, of course, my response would be “try harder,” but in my experience, women often don’t. And I have a lot of experience documenting cheating wives for their mostly angry and sometimes baffled husbands.

Usually, I limit myself to cases involving adultery. But once or twice I’ve been retained by a guy wanting to check out his girlfriend before he pops the question. In those cases, I always point out that the fact they’re in my office is a sign that there are some trust issues, and that kneeling at her feet and offering a ring might not be the smartest move under the circumstances.

Most of the time, they take the advice. Occasionally, they insist I poke my nose in where she really doesn’t want it.

Today, I’m working for one of those insistent fellas.

His name is Thomas Peterman, and he’s head-over-heels for our little Gracie. Has been for years, apparently. He told me they dated before, when she lived in Los Angeles, but that it ended when he found out that she’d hooked up with another man. He was heartbroken, but they recently crossed paths again in Austin, and now things are sunshine and roses and the tinkle of wedding bells.

Or he wants them to be.

He has concerns, especially since she left him once before. Now, he’s afraid that not only does she bump up against a lot of men in her professional career, but that she’s also bumping uglies with them. He saw her with another man having a drink at a local bar. Maybe a friend, maybe an innocent after-work thing, but he had a bad feeling. And considering their history, he thought he should trust his gut.

And so Mr. Thomas Peterman called Blackwell-Lyon Security, asked to speak with whoever could best handle a case of possible pre-marital infidelity, and our office manager, Kerrie, told him that yours truly, Cayden Lyon, was the man.

Which brings me back to Gracie. Because after a consult with Mr. Peterman and the delivery of our standard retainer, I’m now holed up in the dark, atmospheric bar of Austin’s Driskill Hotel, sipping bourbon on a leather couch and pondering the enigmatic Gracie as she sits at the bar, chats up the bartender—with whom she looks quite cozy—and scrolls through emails on her phone.

This, however, is not a surveillance gig. Or, rather, not yet.

When we talked, I explained to Peterman that in cases like these—when the client is absolutely-sure-but-has-no-solid-proof—the best plan of attack is to get the proof he needs. Forty-eight hours minimum of surveillance. Video and still photography, interviews with shopkeepers and similar civilians to the extent the chats won’t tip off the subject, and detailed reports of comings and goings. If possible, phone records and credit card statements are analyzed, though that’s rarely possible in a pre-marital situation in such a limited time frame. And sometimes surprisingly difficult even when a couple is in the throes of matrimony.

You want to be cynical? Start diving into other people’s marriages. You’d be surprised how much the parties in question don’t know about each other. My naïveté was dispelled a long time ago. Trust me when I say that most illusions about the institution of marriage and the concept of fidelity disappear like smoke when you walk in on your naked wife with her feet in the air and another man’s face between her legs.

As I explained during that initial call, at the end of the forty-eight hour surveillance period, the investigator—that would be me—and the client—that would be Peterman—would sit down and review the information together.

In my experience, if the subject is cheating, there are clues within those first few days. Then the client decides if he wants additional surveillance to better make his case in court. Or, in a pre-marital situation, to gird his loins for the inevitable cancelation of the wedding.

Usually that’s the end of it. But sometimes the results suggest that the client’s suspicions are wrong and that the subject is completely faithful. Maybe the client is simply paranoid. Or maybe the subject is doing something outwardly suspicious but actually innocuous. Like the time a client’s wife was planning a massive tenth anniversary party. (And, I should note, she filed for divorce less than a week after learning that her husband had the temerity to question her faithfulness.)

In one of those maybe-she’s-not situations, I always suggest that the client take a deep breath and take her on faith. I suggest it, but I don’t necessarily recommend it. Because ten-year anniversary parties aside, my personal and professional experience suggests that where there is smoke, there’s fire. And if you think she’s fucking around on you, she probably is. Just one more pretty little player in a world full of cheaters and liars.

And in that situation, I suggest to the client that we move on to Plan B.

All of which is to explain what happened today. Because I ran through the Plan A process with Peterman. I explained why surveillance made sense. How it was tried and true, and that he’d walk away with real and valuable information. Only after that initial assessment was made, could we decide the next step.

He, however, wanted to jump straight to Plan B.

And while the client isn’t necessarily always right, he’s definitely the one with the checkbook. And so Plan B it is.

Which explains why I’m here in The Driskill Bar drinking whiskey and watching a beautiful woman flirt with a bartender.

No, I’m drinking and watching because I’m working up a plan. Studying the subject—learning about my mark.

Because in my book the very best way to tell if a woman is the cheating type is to see her in action. And if you can’t catch a few snaps of her with the boss or the pool boy, then the next best option is to seduce her yourself.

And that, my friends, is the plan for tonight.