Thanks so much for reading Tempting Little Tease and/or subscribing to the newsletter!

Be sure to keep an eye out for Brody’s book, Dirty Little Devil, coming soon! (Hint: vsign up for my newsletter (there’s a link in the sidebar!) or text JKenner to 21000 to be notified of all new releases!

And now, something special for you! This Bonus Content is the deleted first chapter from my original draft.  But it was deleted for a reason, so be sure to read the book first and then come back to see Leo and the guys in action! Enjoy! 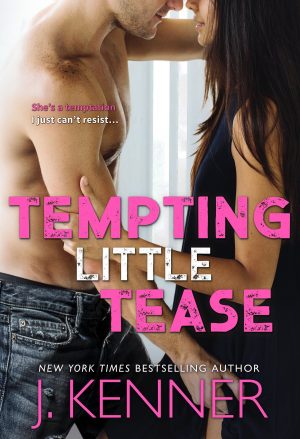 “Leo, you copy? Are you in place?” Pierce’s low voice whispers from my earpiece, and I click the mic twice to acknowledge my position.

“Roger, that. I’m in position and ready to follow if the bastard makes it past Palermo.”

That’s me, Leonardo Vincent Palermo, and I click the mic once in protest against the idea that there is any chance in hell that Rufus Dorne will get his thieving, sniveling carcass past me.

On the line, I hear a chuckle and assume it’s Cayden, who knows damn well I want to call him out, but that I have to stay silent as I’m currently tucked inside the coat closet in the office of our client, waiting for our suspect to make an appearance.

I’ve been working this case for the last two months of my four month tenure at Blackwell-Lyon Security, ever since my best friend, Brody Carrington, recommended our services to his friend Gary Crane, the right hand of one of the United States’ senators from Texas. The Senator’s ramping up for re-election. And Gary suspects there’s someone on staff selling his secrets and strategies.

It only took a few weeks on the case to confirm the breach, and soon after that we had our eye on three potential suspects, with the good money on Dorne.

Today’s all about the cat catching that particular mouse.

The closet is stuffy and smells of sweat and peppermint, presumably from Gary’s habit of constantly popping breath mints. I’ve been in here for almost an hour and am tempted to crack the door to let in some breathable air.

I hold back, though, and am immediately relieved that I did when I hear the sharp click of a key turning in Gary’s office door.

I smile and think, Meow.

“The mouse is in the house.” This time the voice belongs to Connor, Cayden’s twin, who is operating the zoom and pan features of the video equipment we installed to survey the interior of this room and the hall outside. “Let’s see if he goes for the cheese.”

With Connor at the controls, Cayden watching Dorne’s car, and Pierce overseeing the operation as a whole, it falls on me to actually take the bastard down. Now, I use my phone to log into the room’s video feed, giving me the perspective of looking over Dorne’s shoulder.

“Fucker,” Connor says as he tightens focus on the camera aimed at the desk. “And ballsy, too. He just used his own thumbprint to log onto Gary’s laptop. You can bet that wasn’t authorized.”

“He’s tightening his own noose,” Cayden says, voicing my thoughts. Gary has a program installed on his computer that tracks log-ins. With an alphanumeric passcode, there’s no way to know who, only when. But with biometrics…

“He’s setting Gary up,” Cayden says. “The discovery of those files on his computer will completely overshadow the allegations of theft.”

I couldn’t agree more, and I’m itching to burst from my post. But this is Pierce’s mission, and so I wait, my phone back in my pocket, my hand on my weapon, until—

“We’re clear,” Connor says. “We’ve got everything locked in on vid including a shot of his face. He’s not worming his way out of this.”

“Leo, go,” Pierce orders, and the words aren’t even out of his mouth before I’ve burst into the open, my weapon aimed at Dorne, and my cry of “Freeze,” echoing in the dimly lit room.

He looks up, his bushy brows rising to reveal eyes filled with shock—but not fear.

“Hands up. We need to have a little chat.”

He nods, moving slowly as he starts to comply. Then he puts on a burst of speed, grabs Gary’s metal desk chair, and starts to spin toward the window behind the desk.

“Shit.” The curse flies from my lips even as I fire a warning shot. It bursts through the window at the same time as the desk chair shatters the glass, and Dorne leaps through a second later, dropping out of sight.

My weapon is holstered, and I’m across the room before I even have time to utter another curse.

“Balcony,” Connor says. “One level below. Glad I mounted cameras on the roof.”

I look down, but see only darkness.

“Is there a way off or will he double back inside?” The cameras are infrared, which is good since I can’t see a thing through the thick darkness of the night.

“Fire escape,” Connor says. “Ladder mounted to the brick off to the south side. He’s already hoisting tail over the rail. If you double back through the inside, you’ll miss him.”

And so I jump—hoping to hell that Connor is right. That there is a balcony, and that it really is only one story below us.

I get my answer when I land almost immediately with a thud on the polished concrete of this fifth floor balcony.

A tiny light is embedded in the bricks just over the balcony rail, and as my eyes adjust, I realize that it exists to mark the location of the fire escape. I go to that side, hold onto the concrete rail, and peer over.

I can’t make out any features, but there is definitely a figure scurrying down the ladder—and he’s got a significant head start.

With Pierce and Cayden and Connor urging me on, I climb over rail, then reach for the closest vertical post. As soon as I have a grip, I hoist myself up onto the rail, swing my feet over, then carefully maneuver one foot onto the perpendicular rung. Another second, and both feet are on the ladder and both hands are clutching the vertical supports. One more breath, and I’m climbing down.

“This guy’s a monkey,” Pierce says. “He’s almost to the ground. Cayden, be ready to tail him. He’s going to jump in about five feet, hit the ground, then bolt, and—”

“The hell he is,” I say, kicking off my shoes so I’m only in my socks. I loosen my grip with my hands, move my feet to the outside of the vertical posts, and let myself slide down the ladder, just like I used to do on the playground as a kid.

I land on the guy with all the force of my downward acceleration. He makes a yelping noise, falls the final few feet, then hits the ground with a thud.

I hang onto the ladder with my left hand, and use my right to pull my Glock free of my shoulder holster. I descend the rest of the way, keeping a tight aim on Rufas Dorne’s chest as I hit the ground. I move to stand beside him, meeting his angry eyes.

“And that, gentlemen,” I say into the mic, “wraps up a job well done.”